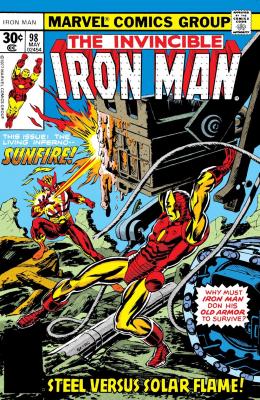 Tony Stark finishes upgrading his armor. Hes removed the thermocouple and solar collectors to make room for life-preserving circuits and electronic storage cells, now that his heart is giving him trouble again. He cant leave until his heart is stabilized by the new suit. Krissy tells Stark that since hes ignored his congressional subpoena the media have been lambasting him, but Stark tells her to hold them off for a while longer. Jasper Sitwell introduces himself to Krissy, saying he recognizes her from somewhere, as Fujiko and Goro Watanabe arrive. Theyre taken on a tour of Stark International as Stark talks to the newly awakened OBrien. Its explained that Kevin was Starks best friend and even replaced Iron Man as the Guardsman, but the suit drove him insane. OBrien still believes Stark is responsible, but theyre cut short by the attacking Sunfire.

We have this item in stock at our house in Chitose Hokkaido and can ship it directly to you now.
♥ 2 LIKES
CONDITION: Nearly all of our items are used. Please be welcomed to email us for more details about the condition. Picture is from online source.
Views: 47

“I walk the moonbeam roads a silver web connecting the many worlds of the Multiverse.” - Michael Moorcock