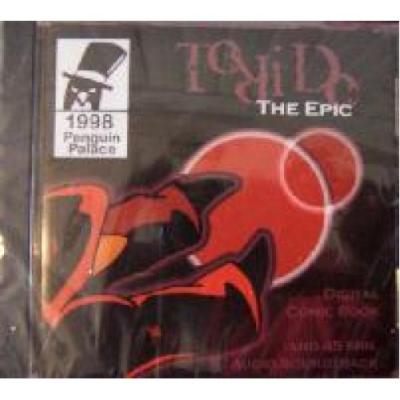 CD/CDROM: Tori Do: the epic by Penguin Palace 1998

Tori Do: the epic by Penguin Palace 1998

Raising the Volume on Digital Comics

Tori Do: the epic is the first digital comic book ever to release on enhanced CD-ROM. The dark techno ambience and drum n bass infused within this enhanced CD sets the tone for the adventure ahead. It brings the participant into a twisted icescape of a medievil future. The objective: to become the omnipresent watcher, observing a young penguin martial artist as he embarks on a journey beyond the gates that have sheltered him. Only a web browser and Real Player are needed to unlock the adventure, and both are supplied on the multi-platform CD. Tori Do is an enhanced CD; the audio can be played in any standard CD player. Viewing the digital comic book requires a CD-ROM drive and sound card.

The digital comic was created by pinguino (Dallas) of Penguin Palace, with musical contributions from RE: (Sacramento), Miguel Q (Dallas), Solo Jr. (Fort Worth), and Nick B (Fort Worth). Penguin Palace is the first publisher to bring together underground musicians, independent comic books, and computer technology, and bind them together in a standardized creation. Unlike movies, digital comic books still leave much to the readers imagination, such as voices and movements between comic book frames. Another Tori Do digital comic book is in the works.

TORI DO THE EPIC [Penguin Palace, US]

The Epic is a unique because its a CD-ROM comic book and a 45 min. audio soundtrack (with four original jungle cuts from the Lostrack Records crew (Texas based d&b label). The comic book, a story about a penguin martial artist and his first quest is a colourful tale which can be viewed on either Mac or IBM. Track one, Evolution starts ou with the low hum sample of a chanting temple monk then slowly picks up with stepping beats. Shifty Looks weaves its way in and out of soundscapes - mainly falling along the tech tip. Chemical Ride, my personal favourite, is the hardest of the four. An energised hardstep piece overlain with sampels and sound FX. And the last track, Toridos Travels is a sort of musical summary of the comic. All tracks take on a soundtrack feel with layered and stylised FX and background string accompaniments. However, all of these tracks are excellently crafted and would work equally well on the dancefloor.

We have this item in stock at our house in Chitose Hokkaido and can ship it directly to you now.
♥ 2 LIKES
CONDITION: NEW in shrinkwrap
DISCOUNT: Yes, feel welcomed to ask us for a discount when you buy more than one item.
Views: 27

“Whenever you find yourself on the side of the majority, it is time to reform (or pause and reflect).” - Mark Twain