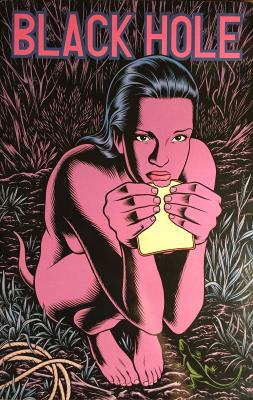 Black Hole is a comic book limited series written and illustrated by Charles Burns and published by Kitchen Sink Press.

Set in the suburbs of Seattle during the mid 1970s, the story follows a group of teenagers who contract a mysterious sexually transmitted disease referred to as "the Bug," which causes them to develop bizarre unique physical mutations and subsequently become social outcasts, many of them running away from home to live in the nearby woodland.

We have this item in stock at our house in Chitose Hokkaido and can ship it directly to you now.
♥ 2 LIKES
CONDITION: near mint condition
Views: 41

"You know you’re working class when your TV is bigger than your book case." - Rob Beckett