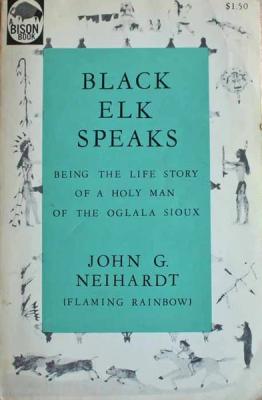 Black Elk Speaks, the story of the Oglala Lakota visionary and healer Nicholas Black Elk (1863–1950) and his people during momentous twilight years of the nineteenth century, offers readers much more than a precious glimpse of a vanished time. Black Elk’s searing visions of the unity of humanity and Earth, conveyed by John G. Neihardt, have made this book a classic that crosses multiple genres. Whether appreciated as the poignant tale of a Lakota life, as a history of a Native nation, or as an enduring spiritual testament, Black Elk Speaks is unforgettable.

Black Elk met the distinguished poet, writer, and critic John G. Neihardt in 1930 on the Pine Ridge Reservation in South Dakota and asked Neihardt to share his story with the world. Neihardt understood and conveyed Black Elk’s experiences in this powerful and inspirational message for all humankind.

Black Elk Speaks is a 1932 book by John G. Neihardt, an American poet and writer, who relates the story of Black Elk, an Oglala Lakota medicine man. Black Elk spoke in Lakota and Black Elk's son, Ben Black Elk, who was present during the talks, translated his father's words into English. Neihardt made notes during these talks which he later used as the basis for his book.

The prominent psychologist Carl Jung read the book in the 1930s and urged its translation into German; in 1955, it was published as Ich rufe mein Volk (I Call My People).

Reprinted in the US in 1961, with a 1988 edition named Black Elk Speaks: Being the Life Story of a Holy Man of the Oglala Sioux, as told through John G. Neihardt (Flaming Rainbow) and a State University of New York Press 2008 Premier Edition annotated by Lakota scholar Raymond DeMallie, the book has found an international audience.

BIOGRAPHYCLASSIC WISDOM
We have this title in stock at our house in Chitose Hokkaido and can ship it directly to you now.
♥ 2 LIKES
CONDITION: Nearly all of our books are used. Please be welcomed to email us for more details about the condition.
BOOK COVER: The cover is taken from google book search unless otherwise noted.
DISCOUNT: Yes, feel welcomed to ask us for discounts.
Views: 51

“The man who does not read has no advantage over the man who cannot read.” - Mark Twain