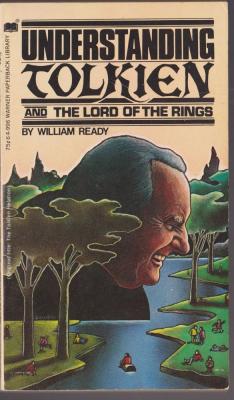 Understanding Tolkien and The Lord of the Rings

In the main, I loathe books that presume to "explain" great authors and the literary phenomena they unleash. This title is the exception to the rule. Neither panegyric nor polemic (a rarity in the field of literary criticism), Ready's assessment of Tolkien and his influence is both honest and insightful. Although verbose, overly abstract, and positively labyrinthine at times (it occasionally seems that he's fighting a desperate battle to keep his fingers apace with his thoughts), Ready's own prose is simply beautiful when he's in "the zone":

"Saruman was the scholar-scientist gone wrong, beguiled into evil for his desire to control Man; first it was to be for Man's own good, then as creatures of his will, for he knew better than they: that is the final stage of blasphemy." (p. 76);

"…Hobbit lower classes are forelock-tugging yokels as divorced from their own dreams and agony as the Irish creatures of Somerville and Ross, the grinning, bowing, house-servant slaves of the Old South, the quaint little 'tween-maids of the Victorian ménage, the cottagers who hedged and thatched and plowed for the gentry while their children went into domestic service in the Big House --all, all are in a Hell that their masters designed for them, and yet most of them believe that that is good for them, or that is all they are good for." (p. 67)

REFERENCETOLKIEN ESSAY LORD OF THE RINGS HOBBIT
We have this title in stock at our house in Chitose Hokkaido and can ship it directly to you now.
♥ 1 LIKES
CONDITION: Nearly all of our books are used. Please be welcomed to email us for more details about the condition.
BOOK COVER: The cover is taken from google book search unless otherwise noted.
DISCOUNT: Yes, feel welcomed to ask us for discounts.
Views: 18

I wish I had the gift of making rhymes, for methinks there is poetry in my head and heart since I have been in love with you. ~Nathaniel Hawthorne