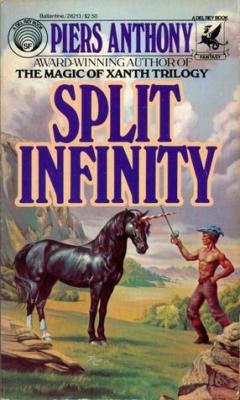 On the technological, decadent world of Proton, someone was trying to destroy Stile, serf and master Gamesman. His only escape lay in Phaze, a world totally ruled by magic. Soon he learned that his alternate self had already been murdered, and that he was next. On Proton, his fate depended on winning the great Games. On Phaze, he must master magic to survive. And if he used any magic at all, his friends were determined to kill him at once!

Piers Anthony is refreshing, hilarious, extremely creative, and I love how well developed he writes his characters. The world of Proton and Phaze are easily imagined given through his writing. And of course, it is easy to get carried along in a story that can be categorized as both science fiction and fantasy. I found it a simple read, but at the same time complex given the detail he used to set each seen, and his colorful dialogue and vocabulary throughout. Who uses the word 'fettle' these days? I don't know, but I think we really should start. It's quite charming, and I feel a certain sense of freedom and inspiration diving back into his various worlds. Now to go find a 'curtain' of my own...


FANTASY5 STARS! BOOK ONE
We have this title in stock at our house in Chitose Hokkaido and can ship it directly to you now.
♥ 1 LIKES
CONDITION: Nearly all of our books are used. Please be welcomed to email us for more details about the condition.
BOOK COVER: The cover is taken from google book search unless otherwise noted.
DISCOUNT: Yes, feel welcomed to ask us for discounts.
Views: 18