Letters from the Earth: Uncensored Writings by Mark Twain 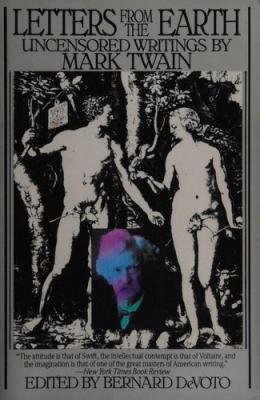 Letters from the Earth: Uncensored Writings

“The most impressive contribution to books by Mark Twain since The Mysterious Stranger of 1916...The attitude is that of Swift, the intellectual contempt is that of Voltaire, and the imagination is that of one of the great masters of American writing.”—New York Times Book Review

Virtually none of the material in Letters from the Earth was published in Twain’s lifetime and the manuscript was only approved by his executors in 1962. This is vintage Twain—sharp, witty, imaginative, wildly funny. His voice is as vigorous and blistering as ever, capable of surprising truth and provoking laughter in the most unlikely places.

In this collection, he presents himself as the Father of History, reviewing and interpreting events from the garden of Eden through the Fall and the Flood, translating the papers of Adam and his descendants down through the generations. There are comments on James Fenimore Cooper, English architecture, and the civilization of the French, as well as proposals for a simplified alphabet and a parody of books on etiquette. Letters from the Earth an exuberantly eclectic collection.

CLASSICLITERATURE
We have this title in stock at our house in Chitose Hokkaido and can ship it directly to you now.
♥ 2 LIKES
CONDITION: Nearly all of our books are used. Please be welcomed to email us for more details about the condition.
BOOK COVER: The cover is taken from google book search unless otherwise noted.
DISCOUNT: Yes, feel welcomed to ask us for discounts.
Views: 31